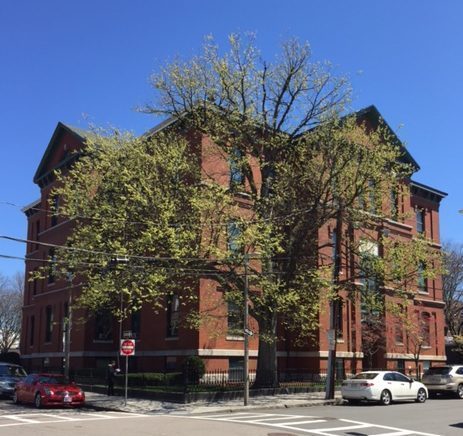 BOSTON – April 28, 2016 – Kaplan Construction, a WBE general contractor and construction management firm providing comprehensive building programs across Greater Boston, announced today that it has been awarded the contract and begun renovations for the Lyman School Apartments, an affordable apartment community located in East Boston, Mass. The senior low-income housing apartment project is being subsidized by the federal government’s Housing and Urban Development Division (HUD) and supported by the East Boston Community Development Corporation (EBCDC). The building was listed on the National Register of Historic Places in 2014.

The project features interior and exterior renovations to an historic red-brick structure that was originally built in 1912 as the Theodore Lyman School. The 40,000 SF, five-story building, located at 30 Gove Street, was converted to elderly housing in the 1980s. The new renovation will create a mix of 45 rent-assisted studios and one-bedroom apartments, office space, common amenities, and community space. It will include the modification and rehabilitation of occupied space, including the conversion and upgrade of five units to handicapped accessible units.

“We chose Kaplan Construction because they were very knowledgeable, experienced and committed to making things work,” said Sal Colombo, development manager at the EBCDC. “It was an easy decision on our end. It was a great fit – they were patient, especially vis-à-vis the budget, and they had the depth of experience with CDCs we were looking for in a construction management firm.”

Project details include masonry restoration, installation of all new windows, new kitchens and flooring, painting, extending sprinkler systems, installation of central air conditioning, updates to code, and updating compliance with the Americans with Disabilities Act (ADA), including an exterior ramp and an interior lift.

“Some of the renovations will take place in occupied residences, which will take skill and care on the part of the contractor,” said Architect Michael A. Interbartolo, Jr., AIA. “Although the building was not listed on the National Register of Historic Places, it has recently been ruled eligible for listing and been awarded historic tax credits to help finance the current renovations.”