As baby boomers retire in droves and vacate construction sites, the industry’s historically male-dominated industry is facing a looming worker shortage. The industry is trying to replenish its diminishing workforce by attracting and retaining more women, a demographic that represents a huge opportunity for growth.

As a WBE, Kaplan has been empowering women to succeed in construction for over four decades. We employ women on a broad scale of essential roles including field labor, project management, admin, accounting, and marketing.

Shalayne Jordan, Laborer
With Kaplan since 2017

Shalayne has always been good at building things to someone else’s specifications. She was once told at a former job assembling household appliances and furniture that her meticulousness and keen ability to follow instructions would make her a great fit in construction. From there she started looking into the trades until she got her “breakthrough” as a laborer at Kaplan. A self-described workhorse, Shalayne has found that working in construction has been the career that she has been looking for all along. When asked what she enjoys most about being at the jobsite, she shared,

“I appreciate that I am constantly expanding my mind by learning new skills and I enjoy figuring out different solutions to get the job done.”

Shalayne’s advice to young females starting out in the industry? If you are passionate enough about it, you will find a way to get it done. In other words, “just do it.”

She didn’t know it at the time, but Rachael was destined for a career in construction after taking a vocational quiz during her junior year of high school. The results of her quiz revealed two skills essential in the construction world: spatial planning and relationship building. With this, she decided to pursue a future in engineering. After earning her degree at Wentworth Institute of Technology, she began her career as a field engineer and gained further experience over the next eight years in various roles 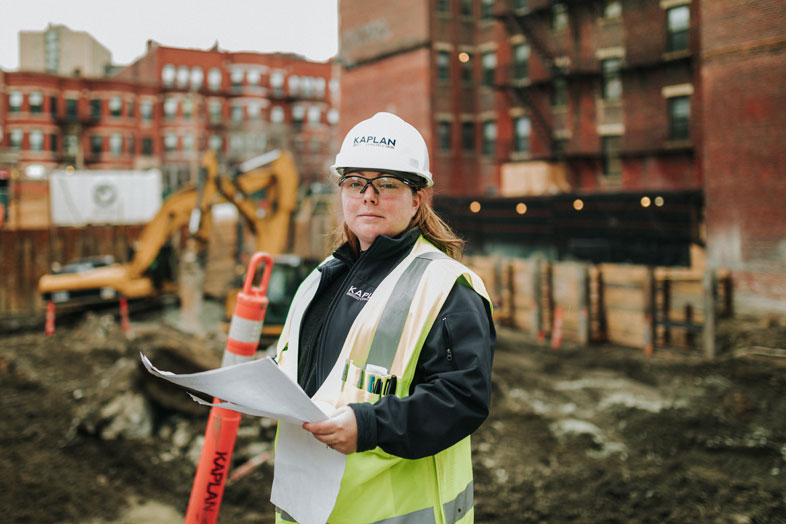 both on and off site. Today, Rachael is a project manager at Kaplan where she has overseen renovations for Northeastern University, MIT, Bright Horizons, and currently, the ground-up construction of a mixed-use apartment complex in Fenway’s Audubon Circle.

As a 15 year industry veteran and former civil engineering major, Rachael is used to being one of the few women in a room. Mental toughness and an ability to “let things roll off my back” have been her secrets to success. When Rachael isn’t trailblazing at the jobsite, she is a mother, wife, and a talented soccer player (little known fact: Rachael’s standout defensive skills on Wentworth’s women’s soccer team earned her a spot in their Athletic Hall of Fame). Rachael has also volunteered her time to mentoring young women, recently speaking at a local school’s GAINS (Girls Advancing in STEM) Club where she inspired female high school students by sharing her experience as a woman in the field of STEM (science, technology, engineering, mathematics).