BOSTON, Mass. – November 8, 2018 – Kaplan Construction, a WBE general contractor and construction management firm providing comprehensive building programs across Greater Boston, is proud to announce that the firm’s historical renovation of 9 Williams Street, originally known as 2101 Washington Street, has won an Excellence in Construction Award (EICA) from the Massachusetts Chapter of the Associated Builders and Contractors (ABC MA).  Kaplan received the Eagle Award, the highest level of recognition that can be bestowed by the ABC, in the category of historical restorations/renovations over $1MM.

ABC’s Excellence in Construction program has become a premier competition within the construction industry, distinguishing outstanding construction projects across the nation. The prestigious Eagle Award represents the pinnacle of achievement and recognizes overall excellence regarding project execution, craftsmanship, safety, innovative elements and challenges, and client satisfaction.

Over 250 ABC members recently gathered at the Westin Waltham Hotel to recognize and celebrate the very best construction projects its companies have to offer. This year’s applicant pool was particularly competitive, with each winner selected for the high standards of craftsmanship, safety and quality delivered by talented merit shop workers using the efficient merit shop approach.

Owned by Madison Park Development Corporation (MPDC), 9 Williams Street is a contributing element to the Dudley Station Historic District, and once housed a buggy manufacturing company. The 51,250 SF building was originally built in 1915 and thus required a full gut renovation and adaptive reuse. Much of the project was funded with historic tax credits and as such, the project had to be renovated to the National Park Service Secretary of the Interior Standards for Historic Rehabilitation. The masonry facades were repointed, which required precise matching to the existing brick and mortar. The corbelled brick cornice and intricate frieze above the main entrance were recreated by a specialist. A historical consultant made frequent visits to the site to perform quality checks on the century-old building.

The result of this renovation is 30 new mixed-income apartment residences and 7,000 SF of ground-floor commercial space. Residences include studios, one-bedrooms, two-bedrooms, and three-bedrooms, and feature oversized windows, abundant natural lighting, high ceilings, hardwood floors, community space, and bicycle storage. The historic building’s facade has been fully restored, and new utilities and finishes have been installed throughout.

In March 2015 the firm’s renovation of the Brookline Teen Center (BTC) won a National Excellence in Construction Award from ABC. Kaplan also received a Pyramid Award in the Community/Public Service category from ABC National and an Eagle Award from ABC Massachusetts for this project. Later that same year, the renovation of a historic building in Newton, Mass. for the Boston Psychoanalytic Society & Institute (BPSI) won three Excellence in Construction Awards from the Massachusetts Chapter of the ABC. Kaplan received the Merit award for historical restoration over $1 million, the Green award, and the Safety award. 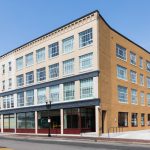