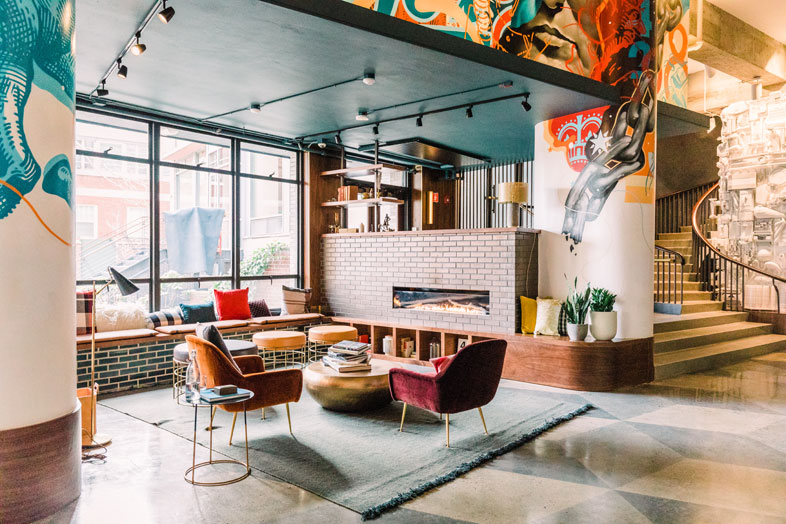 BOSTON – May 24, 2019 – Kaplan Construction, a WBE general contractor and construction management firm providing comprehensive building programs across Greater Boston, is proud to announce that the renovation of the Revolution Hotel in Boston has been recognized as a winner in the Adaptive Reuse category in the Massachusetts Historical Commission’s (MHC) 41st Annual Preservation Awards. In addition, the project was recognized with the Mayor Thomas Menino Legacy Award and a People’s Choice Award at the awards gala held Wednesday, May 8th at the Copley Plaza Hotel. The project was nominated and designed by Prellwitz Chilinski Associates (PCA) of Cambridge.

The MHC founded the Preservation Awards program in recognition of the challenge of preserving our national legacy, and a cultural heritage rich in historic resources. Awards are presented annually to preservation projects or individuals that have displayed an outstanding commitment to historic preservation in Massachusetts. In 2015,  Preservation Massachusetts introduced the Mayor Thomas M. Menino Legacy Award. This award was created to honor the incredible contribution that Mayor Menino made to the historic preservation community and celebrate projects that are transformative, create community partnerships and preserve the best of our cities and towns to make something good for the future.

On December 8, 1884, an estate building at 40 Berkeley Street was dedicated as one of the first YWCAs in the country. At this time, it contained amenities, educational training facilities and dormitories for 156 residents. A brick addition was added in 1902, and the original estate was replaced with a mid-century modern dormitory for young working women in 1953 to form the Berkeley Residence Club. These two buildings are preserved today as the Revolution Hotel.

Located in Boston’s chic South End within walking distance to the Back Bay, the Revolution Hotel is the first Boston addition to The Mount Vernon Company’s collection of independent lifestyle hotels and showcases the city’s revolutionary past. This 163-room hotel delivers an affordable alternative for value-minded travelers seeking affordable access to Boston’s many attractions and experiences.

The design by PCA celebrates the “bones” of the building with tasteful upgrades and stately architecture, contrasted with bold art installations, color and graphics that set the tone and direction for the hotel experience. Numerous vignettes are conveyed through a range of media, from the Boston Tea Party and the Boston Marathon to Wonder Woman (whose first home on Earth was Boston).

Kaplan Construction and the design team tackled several challenges associated with changing the use of this building from dormitory to boutique hotel. To add new bathrooms into the cast-in-place concrete building, strategic cores needed to be located and reinforced with steel beams. With 163 total rooms, existing conditions required layout of 41 different room types. The building’s concrete slabs were supported on old masonry walls, neither of which could be breached, so all ducting, pipes and conduit were run externally along the walls and ceilings, thus requiring custom solutions for fixed furniture, casework, and lighting in each room.

Kaplan upgraded many other interior features of the existing building, including energy-efficient windows, amenity areas, and a lobby which showcases custom concrete flooring and a custom mural. Exterior work included a full roof replacement and improvements to the private courtyard. They also did a full fit-out to accommodate a basement bar, lounge, and fitness room. The bar and lounge functions as the co-working space Conspire during the day. The hotel is now open to the public.